Play with us at Gamepolis Málaga 2019 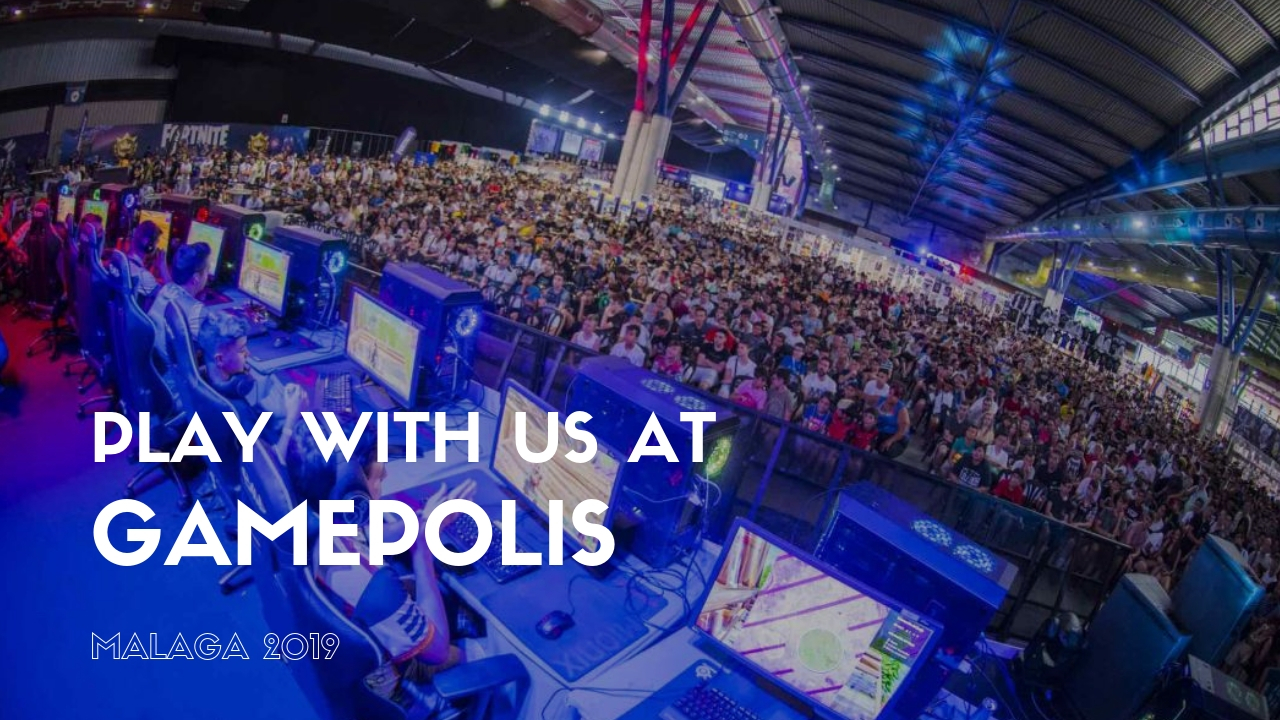 On July 19, 20 and 21 it’s time again: Lovers of videogames, indie developers, professional companies, Youtubers and influences gather in Málaga again, at the VII Edition of Gamepolis. Not only on the Spanish level, even internationally the festival has earned credibility over the past years.

Intel HP, Microsoft, Nintendo, NVIDIA, PlayStation, MSI, Ozone, Versus and Ubisoft are just some of the many companies supporting the event with their most recent news and inventions. In a 60.000 m2 area, more than 50.000 visitors have a great time with the latest games, big tournaments, concerts and in short, the best gaming fun in the country.

No matter what your preferences are, Gamepolises’ activities got something to offer for everyone. Conference talks, a Kpop competition, the possibility
to challenge famous pros of gaming face to face and workshops for art, creativity, programming and videogame design.

Many different subject areas are covered, starting with tournaments of esports and free play, going on with one big expo zone for big companies like Nintendo, a zone specialised in retro games and one especially for small indie games.

Talking about small indie games: Haven’t we talked about our game Desolatium, developed all by ourselves, Superlumen, earlier?

It’s the second game we developed, inspired by graphics from the 80s and 90s like Myst or Lost in Time. With one important twist: it’s in Virtual Reality. In the game, you “point and click” yourself through an “Escape Room” like scenery. Immersed in a series of mysteries and murders that you will have to investigate in first person, you move through different levels with different characters.

A story based on the Victorian terror of authors like HP Lovecraft or E. Allan Poe, full of sects, rituals, ancient cults and primal gods, in which little by little you find yourself involved in events that will put our sanity to the test. Old abandoned hospital, a cemetery or a sinister forest must be crossed, while you collect objects, reveal clues to find your escape. Using real photos for the 360-degree immersion is what makes our game unique and the only one of that kind on the market. But it’s not only us, that think the game is quite cool. Last year, the demo version on Desolatium won the Award “Most Innovative Game of the Year” Award of the Sony Playstation Awards. We’re still dreaming about that event.

So how cool would it be, if Superlumen had its own stand at the fair, presenting Desolatium to all of the visitors, all of you? Well, exactly that is going to be the case.

What we’re looking forward to

Most obviously, to be able to present Desolatium to you, at our very own stand. Fully equipped, computer and head-mounted displays all with us, we’re going to do exactly what VR is known for: immerse you completely and beam you out of the fair, into the different world of Desolatium.
Professionals, developers and creators that have a video game on any platform can participate in the indie area. Games of all stages of development or even already published ones can be discovered.

All types of video games are allowed regardless of gender or platform, either on mobile devices, desktop or consoles. The Indie Zone of Gamepolis aims to create links between creators and their projects, the community of players, developers or media. We’re so excited to try games of other teams and see what ideas emanate their minds!

Over those 3 days of trying out game after game, visitors can vote for the game that in their opinion is the most promising. Apart from that public prize, a jury of 5 professionals is going to judge in the categories

all awarded with a trophy and some even with 1000 €. Will Desolatium make us stand out from the crowd? We can’t wait to find out!

Besides gathering new ideas and inspiration, we’re eager to learn many new things. Above all when they are taught to us by the best of the best of professionals of gaming. To just give a few examples: John Romero from America, also called “father of game developing” is going to attend the event. Brenda Romero is going to teach us about the emotional power of video games. The dubbing actors Joël Mulachs and Rafael Azcarraga are going to give us an insight into their work. Additionally, a round table discussion among journalists in the field of video gaming is going to take place. And if in the end the constant noise of words and talking gets on your nerves: A concert of video game soundtracks is waiting for you!

After listening and absorbing information, it’s time to turn words into deeds! All knowledge learned before in the conferences can be applied by yourself in real life during workshops. Thanks to the SUPERIOR SCHOOL OF VIDEO GAMES AND DIGITAL ART in Málaga all three days will be packed with the coolest topics. Feel like learning more about retro pixel art? What about the Engines Unreal and Unity? Finding out how to draw Dragon Ball? How to create characters in 3D? Gamepolis got you covered.

And if hundreds of undiscovered games, conference talks and workshops aren’t enough for you, Gamepolis has a lot more to offer.

Want to immerse yourself completely and become your favourite video game character? Dress up and shine and enjoy the Cosplay Competition that it taking part on the 20th. In total 1000 € of prizes will be given out in different categories such as Cosplay in esports, Cosplay in Nintendo, Cosplays with armours and so on, and so on.

Gaming isn’t known to be one of the most active activities to do. Shake things out and get chipper by watching the KPop Dance Contest.

Feeling strong and interruptible? You may get the chance of your life as you can challenge celebrities like John Romero himself to play against you (We already wish you good look with that).

Be part of the crowd and cheer for your favourite team at several esports events. Fortnite, Counter Strike and Fifa19 are just a few examples taking place. Afterwards there’s even the possibility to meet your beloved idols!

If you’re more of the antisocial kind and THAT many people at one place stress you out a little, don’t worry. There’s a freeplay area especially for people like you and me who themselves want to challenge their skills and find out who’s the best player of the round. Pokemon, Just Dance and Rocket League are part of the game.

See what’s new on the market of gaming in the expo section where all news are presented to you or dive into an amazing retro world of vintage hardware and games in the retro zone.

Just taking a quick look at the list leaves us overwhelmed by the possibilities and full of excitement. Definitely, we’re going to tell you afterwards, what were our favourites.

Our excitement grows even bigger, when we take a look at last years winners of the indie game contest – in the hope, that we’ll come upon brilliancies this year.

When it comes to the game that won the prize for the most innovative game and also the public prize, we can imagine too well how “no risk, no fun” must have been the guiding principle in that company. We already hear phone screens cracking in the distance when playing Skapp by Bound Games.

We don’t have anything special to add to Super Dodgeball Beats by FinalBoss Games. The titles “best visuals” and “best game design” already define it quite well.

Now, it’s time to pull your headphones out: 3 Minutes to Midnight by Scarecrow Studio won the prize for the best sound.

The title best indie game was won by Greyfall: The Endless Dungeon by Therion Games.

Will Desolatium by Superlumen be the next to carry that title? What a dream that would be! But first, we have to arrive at Gamepolis in two weeks. And afterwards, it’s needless to say that we’re going to tell you about all that happened. All highlights (hopefully no disappointments), achievements and wonderful surprises!